Let me tell you a little more about myself

I was born in Johannesburg in 1952 and I consider myself to be a very fortunate person, mainly because of the family I was born into. Music was an integral part of my upbringing, as it was for my 3 siblings. I am still very closely connected to all of them, and we play together regularly in the Barking Family Tree Band. (Yes I know it’s a silly name!)

I started playing the guitar by ear when I was 11 years old and never looked back. I started on simple folk songs from The USA and the British Isles, and Jeremy Taylor (of Ag Pleez Deddy fame) showed my Dad and me our first chords.

Our rather bohemian home was always full of music and musicians, and the 1960’s was a wonderful time to be playing. My father, Keith Blundell, a well known musician and entertainer, put us all on the stage from the beginning, so our  playing became very performance orientated.

I was in love with music and the life that went with it, but I was remarkably lacking in ambition! There was never a shortage of venues to perform at, and driven by my energetic father and supportive mother, we appeared in many folk shows,  later appearing live on radio and then on TV. My favourite places to play were the local Folk Festivals and Folk Music clubs, and of course I did a lot of playing in bars and restaurants, which I mostly hated!

For an income I also relied on teaching the guitar which I did from the time I left home at 18. Luckily I enjoyed it then and it is still something I really love to do. I also run Barn Dances ( another legacy left to me by my wonderful parents), as  does my youngest brother Teper and his wife Siobhan. www.barndance.co.za. 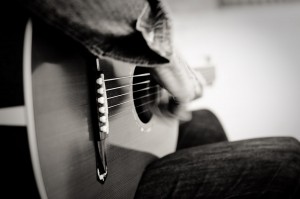 I finally wrote my first song when I was 40, and my album is really a retrospective from then until now. I never really thought I would have the chance to record a “proper” album, mainly because it is very expensive. I also thought my music  wasn’t commercial enough, but thanks to the very generous sponsorship of my musician friend Neil Harvey, it has all come together beautifully. I am over the moon with the results, and it feels wonderful to finally have a decent record (pun  intended) of some of my songs.

My brother Jonny Blundell is a great guitarist and music producer, and my sister Julie is an exceptional harmoniser, as well as playing great acoustic guitar and bass guitar. I have to include them in the “about myself” bit, because they have  had so much to do with the way my songs have developed and also the way my album turned out. I have been so lucky to have the support and contributions of time and talent from many people that I know and love.